Running out of gas in a Prius 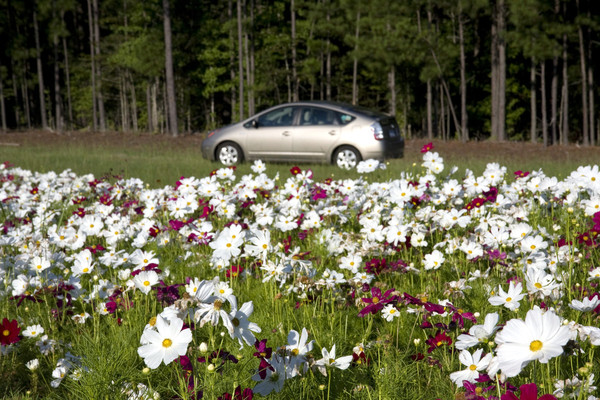 Speaking from the experience of running out of gas in a 2007 Prius, and helping my daughter doing the same (twice) in her 2008, here are some notes to share with my fellow Prius owners.

The Prius doesn't tell you it's out of gas. It just keeps driving, with much less power, on just the battery for another mile or two (depending on speed, battery charge, and the road). Then, a big red warning triangle shows up on the dash, and the car stops responding. So, after getting some gas in the tank by the usual methods of walking, hitching a ride, or calling someone, the car will start back up. The engine will run like crazy, because it's providing all the power while charging the battery, so the car will be much more sluggish than usual for the meantime.

In my case, the warning lights did not clear until the battery was comfortably charged, and I'd turned the car off and on again. Not sure I want to repeat this a bunch to find out if that's the usual response :)

Now, it can get trickier. If your daughter runs the A/C and the radio for a couple hours while waiting for gas, the electrical system battery will get weak. It doesn't necessarily have to competely die! (Done that before, too). When it's too weak, the engine will not crank. Since the drive battery is also dead, the car won't move at all. I'm not sure which battery starts the engine, though. We also encountered some other bizarre behaviours in this situation:

We had to use jumper cables to charge the weak battery, and then the car started and all was well.