Wow! Life has been crazy!  Once I post this review I will be officially  caught up with my reviews for  The Old Schoolhouse Review Crew.

This review  is for  the Medieval Machines Pack from Pitsco  and was an item  I really hoped to be chosen for because I thought my 14 year old would love it! (He did!) Wonderfully, the kit came just in time for his birthday in the beginning of November. Since his grandparents were  visiting  around the same time, I suggested his grandfather (who is also an engineer) help build it with him.

Overall, the building of the small model trebuchet  went without a hitch. There were a couple parts of the instructions that took longer to understand and my 14 year old was thankful to have help since he didn't feel comfortable assembling it alone. I was nervous the thin boards would splinter when separated from the sheets. Each piece needed to be punched out of a single sheet of balsa wood. No cutting was required, but some pieces did stick a little and I thought for sure they would break- but didn't. Our experience in the past with balsa airplanes  (not from this company!) was the cause for my anxiety. The wood seemed thicker than other punch outs we have had experience with.

The assembly ended up taking about 1 1/2 hours for the trebuchet, which was longer than I thought , but I have never assembled anything like this , so I didn't have any idea what a realistic expectation would be. Both my son and father-in-law enjoyed the time they spent making it and my husband's Dad spent a long time explaining the trebuchet as they went.  The overall size was much smaller than I expected. Let's say, I was OK with him shooting it in the house.

My son completed the catapult included in this kit on his own. He lost one small piece, but was able to make his own based on the shape of the missing piece. He was very proud of his accomplishment and it was an excellent project for him to work through. 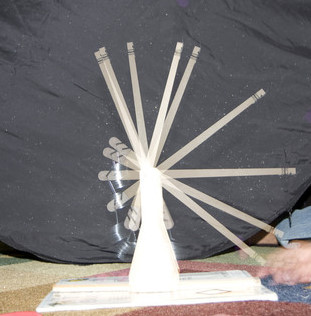 Before you purchase this kit - available for $21.95 -or others on the Pitsco Education site, you can see a full list of needed supplies. That was very helpful to have collected before the arrival of the kit.

In addition to just being a fun building activity, my son spent several days weighing out different sized balls he made from the clay (separate item from this kit, but included in my kit for this review).  He measured how far the clay balls flew and noted which went the furthest.  My son also shot about anything else that would fit in the sling of the trebuchet or the bucket of the catapult. Wrapped soft mints seemed to be the favorite thing, though Marshmallows, crumpled paper and coins were also tried.

Many other kits are available and all are reasonably priced. Some of the kits come with full lesson plan sets including over 20 hours of teaching material.  There is also a larger model demonstration trebuchet. The experience has given my son more confidence in trying to build other things and certainly sparked an interest lacking before.  He has both still and keeps them well out of reach of his brothers. He pulls them down to work on them and shoot things off. I wished we had been able to do a mini-unit study surrounding medieval times, but 3 trips to Russia took place between my son's birthday and this review. Plus, my oldest daughter spent 2 weeks in a hospital almost 5 hours away for seizures and breathing difficulties. So, needless to say, we had too much going on to build a whole unit study around these items. We did pull out a few books and my sons remembered reading about medieval times in the past. So, we spoke about that.

I would buy more kits in the future if we had the funds to do so. However, I would probably get a kit with the other materials included since I don't know much about the workings of things and have zero experience with physics. Clearly, Math, Science and History would easily be included in a unit study using this kit.

As a member of The Old Schoolhouse Review Crew, this kit was provided for free in exchange for my honest review.